We were excited to launch our logo on 4th January 2016:

The logo represents both versions of our name – “3DN” as well as “Department of Developmental Disability Neuropsychiatry”. “3DN” is the main focus because it is snappy, easy to say, and it is visually balanced. Our logo sits alongside the UNSW logo, signifying our connection as a department within UNSW Australia.

Heather is a woman with an intellectual disability who lives in Sydney with her family, and attends Miroma, an Inala day service, five days per week. Although she does not greet people in a conventional way, she has close bonds with family members.

Heather is usually a very happy person. She has a quiet disposition and usually prefers to be on her own, but sometimes likes to be social and active.  She enjoys connecting in her own way with people around her, laughing and repeating things she hears.

Heather loves watching movies, walking, trampolining, and listening to music. She particularly enjoys songs from musicals such as The Sound of Music, jazz, and popular classical music such as famous arias from Gilbert and Sullivan operas.

Heather has been painting at Miroma for more than 14 years. For many years Heather painted twice per week, but recently she has been participating more in music and community access programs. She mainly uses acrylic on canvas or paper, and creates about eight pieces each year. Once or twice a year Heather’s works are shown in exhibitions, and over the years many of her pieces have been sold.

Heather enjoys painting and is pleased with the beautiful artworks she creates. Sometimes her demeanour while painting is peaceful and soft, and other times it is playful and more assertive. Heather usually paints a few strokes at a time, returning many times to the canvas to create the final work. A single painting is usually completed over a period of weeks or months. When she decides she’s painted enough Heather puts her brush aside.

Heather completed the artwork used in the 3DN logo over a period of three months. 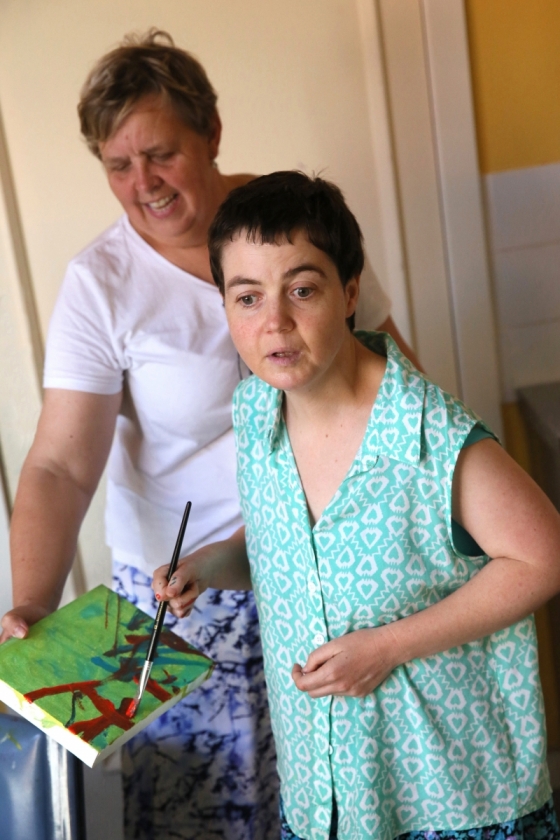